With Bakes on mesh coming I’ve been looking long and hard at our UVs, knowing that soon mesh makers will not be able to hide their flaws with proprietary appliers any longer and I will not be able to make the worst offenders fix their Meshes before they hit the market. The Era of Bitchy Chelly telling you to “fix it or no Omega” will soon be over.

To that end, I’ve been tweaking our UV maps in the hopefully not vain hope that it helps fledgling mesh makers with their UVs now that they aren’t beholden to pass before my evil eye! We’re likely to see a TON of new meshes hit the market when BoM hits as it will soon be way easier to churn these things out. So I’m looking for anything I can do to make the chaos a little less Chaotic.

Already I’ve added additional guidance to the Head UVs, marking waterlines, nose lines, and horz markers to make it obvious when the eyes of your UV has become twisted.  Older Meshes can still be a bit wonky as I had no idea what I was doing at the time, and not too many change their UV YEARS after they released it, but newer meshes have all had much better maps. (Kudos to those who have fixed their UVs years after! I APPRECIATE YOU)

The Upper Body UV was tweaked awhile back to add Nipple locations for women AND men. A change that is having a similar effect as I thump new mesh makers over the head with my UV maps. Older Skins and Meshes still have Male Nipples all over the place, but some have fixed them much to my delight. (Again, THANK YOU!)

Lash UVs have been established and are slowly proliferating as the old head makers one by one take them up and most of the new guys jump right on board!

Now the only thing left (hopefully!) is the Nipple UV.

But the truth is, Lola has several different maps. And every breast/implant out there has their own slightly modified map. All use the general “circle in the middle of the texture”. So, as long as the breasts are mod, it’s never been an issue. You just tweak the texture alignment and it fits! But Mesh Bodies don’t like being Mod. (Despite my assurances that it’s safer for them!)

There’s also the vague threat of UV based DMCAs. (I’ve had at least one creator tell me they don’t dare use Tangos map for that reason. )

So we really need a Nipple UV we can all use. So, after looking at all the various Nipple UVs I’m aware of, I have created this: 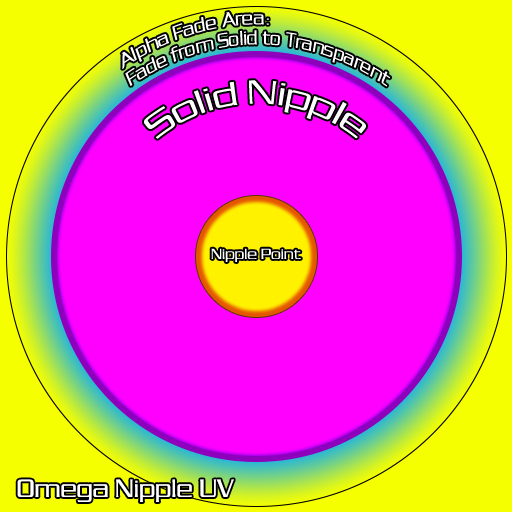 This is now my recommendation for all Mesh Makers, new and old.

My Mesh is already Omega, do I HAVE to change my nipple UV?
No, although I encourage it. You would be helping the community.
As usual, Only NEW meshes are subjected to UV checks and will be required to adhere to new standards for support.

Won’t this conflict with existing textures?
Unfortunately yes. But Existing Textures already conflict all the time. Breast UV maps are all over the place. That is why I always recommend leaving meshes modify OR with some option for Repeat/Offset tweaking. Hopefully, over time, Nipple UVs can start to converge the way other UVs have once Standards are introduced.

So I hope this helps. If anyone has any questions/concerns/comments please drop me a notecard. 🙂
-Chellynne Bailey